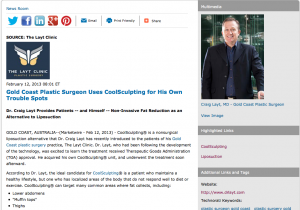 Dr. Craig Layt provides patients – and himself – non-invasive fat reduction as an alternative to liposuction.
Gold Coast, Queensland – CoolSculpting® is a nonsurgical liposuction alternative that Dr. Craig Layt has recently introduced to the patients of his Gold Coast plastic surgery practice, The Layt Clinic. Dr. Layt, who had been following the development of the technology, was excited to learn the treatment received Therapeutic Goods Administration (TGA) approval. He acquired his own CoolSculpting® unit, and underwent the treatment soon afterward.
According to Dr. Layt, the ideal candidate for CoolSculpting® is a patient who maintains a healthy lifestyle, but one who has localized areas of the body that do not respond well to diet or exercise. CoolSculpting® can target many common areas where fat collects, including:

The CoolSculpting® procedure uses a special device to cool the excess fat cells in the treatment area and draw them into a cup with vacuum-like pressure. This action creates an inflammatory response, which ultimately breaks down the fat cells and allows them to filter out of the body through natural processes over the next few months.

Dr. Layt, a Gold Coast Plastic Surgeon, stresses that CoolSculpting® is not liposuction and is intended only for those patients who are aiming to target isolated areas of body fat. CoolSculpting® offers this subset of patients a nonsurgical alternative with the same results.

When asked about impressive patient results, Dr. Layt cites himself as his primary example. He says, “Despite training hard several times a week and being careful with diet, I still kept the little bulge over the jeans. One treatment and three months later, it is gone in the treated area. I will be treating a few other areas when I can get back at the machine.”

According to Dr. Layt’s experience, the process is a relatively painless one. For the first few minutes of the procedure, he says there is an aching feeling but the area quickly feels numb. He also adds that at the end of the procedure patients may experience a tingling sensation as the targeted area warms back up. There is virtually no downtime with CoolSculpting® and Dr. Layt says he was back to work ten minutes after the procedure was complete.

Dr. Craig Layt is a graduate of the University of Queensland Medical School. He continued with his general surgery training at the Princess Alexandra, Mater, and Greenslopes Hospitals in Brisbane, and the General Hospital in Townsville. Dr. Layt trained in Plastic and Reconstructive Surgery at the Royal Brisbane Hospital, the Princess Alexandra and Mater Hospitals. Dr. Layt’s private practice has been in operation since 2001. Along with serving as a corresponding member of the American Society of Plastic Surgeons, Dr. Layt has also served as the president of the Australasian Society of Aesthetic Plastic Surgery.